We illustrate our work with real stories of children. In the interests of confidentiality we always change details. We also do not use the stories of children who are still with us. Many stories are similar.Even if you think you know the children it is unlikely you will identify them.

Mercy is a child who was used to defying her father’s authority and doing as she pleased. This led to constant fights with her father which ended up turning into physical violence. Mercy is 15 and liked to think of herself as an independent young woman. After being placed at Ons Plek early this year she showed the same cheeky behavior. She accused her father of physically abusing her and played the victim. She displayed a lot of anger and aggression towards her father and blamed him for being in children’s home. The truth is her father could no longer cope with her challenging behavior which had started to include sleeping out for weeks. She took advantage of the fact that her father  struggled with alcoholism. Whenever he tried to discipline her she focused on his inability to control himself.

Mercy was difficult during the first month. She ran away with some of the girls she had befriended and spent some time with boys around the Cape Town area. She showed no regard for adult authority and clearly showed disrespect by walking away when spoken to. She did not want to be at Ons Plek and did not know why she had to suffer when her father was the one with the problem. It was clear she wanted her independence to do as she pleased.

She used manipulative techniques to get her way. In one incident she scratched her arms with a sharp object to harm herself. In counseling it slowly became clear that the anger the child displayed was due to the fact that she had never dealt with the death of her biological mother. Upon reflection she admitted she had never forgiven her father who also used to abuse her mother physically before she died. Since her mother’s death she was placed with her maternal family who all rejected her and sent her back to her father. It then became apparent that all the anger and the tough shell she had was meant to protect herself from rejection, further loss and so she rejects first and acts like she does not care. The child soon began to open up and start facing her issues for the first time. 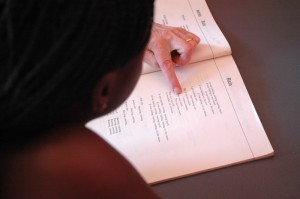 Before being placed at Ons Plek she had been suspended from school due to rude behavior towards the teachers.  At Ons Plek she started working in our bridging school to prove that she could do better . She wanted to return to school. The one time she ran away in her first unstable month was the last time. She worked hard at controlling her anger with guidance. When she got angry she would take some time to calm down, read a book and speak about it later. This worked well for her.

She showed such great improvement that she soon returned back to her school and at present is doing very well. Her relationship with her father still needs some work. It was therefore recommended that the father get help for his drinking problem. Mercy visited home on weekends to spend time rebuilding her relationship with her father. She even attended his first AA meeting with him. Family reunification became a reality as both parties are worked hard to ensure it happened

Homework support once back in school

Lifeskill programme (duties and chores in the house)